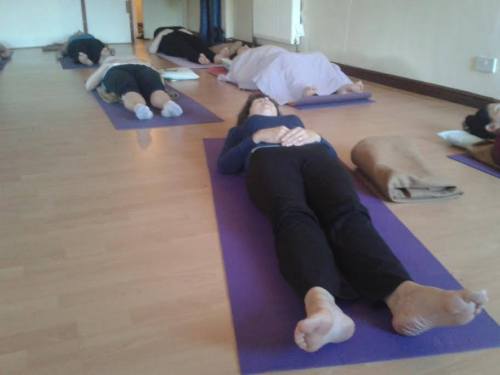 I was first introduced to yoga nidra almost a decade ago when it was mainly seen as another yoga relaxation tool. It still is but I have come to realize that there is much more potential in yoga nidra than merely helping us relax.

What is Yoga Nidra mean?

Well, loosely interpreted it translates as Yoga Sleep and when used as a relaxation technique a half hour of nidra is said to be equivalent to 2 hours conventional sleep.

Nidra is practised mainly while in savasana but any position will work provided you can relax.

The elements include opening only ones audio perceptions and listening to the instructions of the person conducting the nidra.

Rotation of Consciousness and Visualizations

There is a period in the nidra when we are invited to visualize a number of arch type objects such as clouds, deserts, temples, beaches etc and then another period when we experience what is called rotation of consciousness.

In rotation of consciousness the “narrator” takes us on a journey around the body making reference to each body part from the right to the left systematically. This has the effect of relaxing the body and the mind bit by bit calming down those neural pathways between the brain and body. The visualizations are said to have the effect of smoothing the minds level playing field allowing for the alleviation of the effects of our mental and emotional patterns that are our deeply ingrained often negative habits and known in yoga as samskaras. They are likened to muddy cart tracks that have hardened to the extent that they keep pulling successive carts onto the same exact path. So it is with our minds where we create over time deep rutted neural pathways that continually take us down the same mental and emotional roads. Visualization can help to smooth out these notional tracks.

So even in its basic form Yoga Nidra can have a positive effect on our minds and bring us great relaxation and calmness.

Sankalpa or Resolution and Yoga Nidra.

We can make resolutions whilst relaxed any time and they can be very beneficial but in Nidra they become one of its prime movers. In Nidra practice we make a sankalpa or resolution close to the start and at the end of the practice with reference to something we would like as an outcome. As this resolution is done in deep relaxation it can have a very profound outcome mainly because it is more likely to register deeply with our subconscious. The difficulty is coming up with the right sankalpa.

I have come to the conclusion over the years that it is necessary to have some resources within us to make the sankalpa achievable. So if for example we ask for something material such as a large mansion or to become a millionaire within 6 months this might be possible provided we truly know we have deep within us the resources to make that happen and we are only prevented from achieving it by some obstacles. This has to be genuine and not an illusion. The sankalpa can help remove those obstacles. If you do not have those resources and still ask for the lofty outcome your mind can be thrown into conflict trying to deal with the demand.

So depending on your resources it might be best to start with simple resolutions. Those that are within your grasp but for some reason allude you.

The thing about Nidra is that you can progressively use it to build your strengths until you have greater resources over time. You may never have the resources to gain the mansion or the millions but there can be many gifts along the way. I have found that it is best not to be preoccupied with what you want materially or socially or anything else that concerns personal development but rather to think more about what kind of person you would need or like to be to achieve the things you truly desire which may not be material.

Using Nidra in this way can often lead to more profound and lasting change. Remember that the yoga sages of old used nidra to develop their spirituality. Gradually over time cultivating their body, mind and spirit to move them ever closer to samadhi or the ultimate being state in yoga.

Finally, if you think that by practising nidra and listening to the instructions of a stranger might be risky it is important to point out that you can actually record a nidra script on to your own mobile and listen to your own voice while relaxing. This way you can use the same script for some time and periodically change the sankalpa.

Many sages and yoga masters have claimed that their advancement and progress on the yoga path was made more possible because of their systematic use of yoga nidra. All the more reason why nidra should not be ignored.