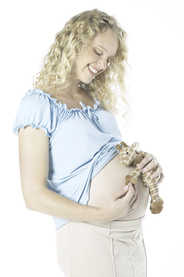 You and your baby deserve the most wonderful birth you can achieve, Sharing that first beautiful moment with your new baby in a confident and relaxed way is something that you will never forget. Make it a precious experience, relax and celebrate the miracle of birth. Enjoy your pregnancy and have a confident birth with the help of hypnotherapy techniques to help you to understand your body to get the best experience, relax and enjoy.

Tobys Mum says "The hypnotherapy really helped me prepare for and during the birth. I felt very in control and relaxed and did not require any pain relief"

Andrea Lowe, Senior Hypnotherapist at The Mind and Body Centre offers a Hypnotherapy session for birth preparation on Mondays 6 - 7.30 Josie Penn claims the final hour of her delivery was merely ‘uncomfortable’, as opposed to outright ‘painful’

A first-time mum has told how she ditched pain relief to give birth to twins naturally using ‘hypnobirthing’ techniques.

Proud Josie Penn was so chilled-out at points during her 14 hour labour she almost fell asleep in the hospital birthing pool.

She also claims the final hour of her delivery was merely ‘uncomfortable’, as opposed to outright ‘painful’.

And now the 31-year-old has urged other mothers to follow in her footsteps, saying birthing twins doesn’t have to be traumatic. Nutritional therapist Josie, who welcomed gorgeous, non-identical girls Margot and Devon into the world on January 27 this year, said: “Would I recommend hypnobirthing to other mums and dads? Definitely. Absolutely.

“Having twins through hypnobirth, totally naturally and without any pain relief, certainly seems to be fairly unusual. The midwives definitely appeared fairly surprised!

“And whether you’re planning a home birth or you’re having a C-section, I definitely think that it gives you so much confidence going into the labour.

“It enables you look ahead to childbirth with real positivity, rather than feeling like it’s something scary, looming on the horizon.

“Discomfort is unavoidable when you’re giving birth, but it doesn’t have to be excruciatingly painful.” Hypnotherapy for childbirth - first discussed by scientists in the 1940s but which has only recently gained real weight - is the art of allowing yourself to sink into a deep state of relaxation whilst in labour so that your body does everything it needs to do quickly, easily, comfortably and sometimes even painlessly.

Josie’s husband, advertising director Thomas, 31, explains: “When we went for our three month scan, the sonographer said, ‘I’m glad that you’re both sitting down because I have some news - you’re having twins’.

“Initially I had a real sense of fear and found myself thinking ‘How on earth are we going to manage? Everything is double, everything is twice as expensive, are we ever going to sleep?’

“We went through a month or two of real anxiety. Josie was getting worried about the birth itself, and I was just blown sideways.

“And that’s when we started thinking about hypnobirthing more and more.”

Luckily for Josie and Thomas, Josie’s sister is Emily Street, one of the UK’s leading hypnobirth practitioners and acclaimed midwife with Cheshire’s Reproductive Health Group. Emily explained the benefits to Josie and Thomas who then undertook an evening class with London based HypnoBirthing Practitioner Michelle Pearson.

She also shared positive affirmations and scripts that Josie used leading up to the birth such as, ‘My baby’s in the safest position possible’ and, ’I was made to do this. My body is designed to do this. There’s nothing to fear’.

Thomas - like many others in the UK - admits that he held scepticism about the controversial technique considered by some to be ‘New Age’.

He admits: “If I’m being honest, initially I was quite sceptical about hypnobirthing. When we first started learning it, I thought, ‘Hmmm, Is this a bit of a nonsense..?’

“But Josie and I had already found that it was often best not to talk about our birth with anyone else. Because when you tell people that you’re expecting twins, everyone says, ‘Oh, you poor things. How are you going to cope?’

“All that negative energy builds up a sense of real anxiety, and we were desperate to get rid of it. “As a result I was willing to try anything to help Josie feel more confident and empowered about our situation.”

That, however, was at odds with NHS specialists advising them.

Due to the increased risk of complications with twins, Josie, from Hackney, east London, was told that the home birth that she'd hoped for was out of the question whilst the idea of a birthing pool for twins was frowned upon.

Josie’s doctors also continued to raise the spectre of an emergency Caesarian section and of the potential need to have an episiotomy - a surgical cut in the area between the vagina and the anus to help the baby’s delivery.

Josie says: “We were getting more and more nervous. It felt like we were losing control of our own birth scenario.

“And what hypnobirthing did was give us a way of learning how to keep relaxed despite the stress that was building up around us. It empowered us.”

And on January 26, at around 11pm, Josie’s contractions began as she cuddled hubby Thomas in bed.

Bizarrely, Josie felt a sense of ‘bliss’ rather than blind panic

She reveals: “It’s funny, it felt like the most blissful moment, heavenly even.

“It’s so strange. The contractions were quite intense and close together, but all I could think was, ‘We can do this! It’s only two babies, for God’s sake. Let’s stay at home, run a nice warm bath and forget about all the doctors!’

“There wasn’t a moment where I thought, ‘Oh crap, what happens now?’ I wasn’t scared of what was coming. I definitely attribute that to hypnobirthing.”

Thomas eventually took Josie to Homerton University Hospital at around 2am and by 7.30am she was in a birthing pool.

But Thomas laughs: “Josie was so relaxed, she started nodding off and her contractions stopped!”

They eventually exited the pool in a bid to get the contractions started again and by mid afternoon Josie’s labour was in full swing - and she was still desperate not to have any pain relief.

In the hours previously she’d had a few gulps of gas and air, but in the final few hours she went without it entirely.

Josie, originally from Hale, Cheshire, said: “We were never going to put either myself or my babies at risk. We just wanted a chance to prove that hypnobirthing could work without drugs or intervention.

“There were points early on where I was in pain. A handful of the contractions were horrible.

“But I honestly didn’t have that feeling when I was pushing during labour.

“The feeling was more… discomfort, and confusion about what my body was doing, rather than extreme pain and being stretched.

“And what’s really important is that I didn’t feel scared. I was just completely focused. I was calm. At no point did I think my body couldn’t do what it was trying to do.

“And that was a powerful thing, something that really surprised me.

Josie beams: “I just couldn’t believe it. I was stunned, and beyond happy to have done it without an episiotomy or a C-section, which I thought we’d been destined for.”

Meanwhile Thomas adds: “Because of the hypnobirthing techniques, Josie had gone somewhere deep inside herself. She’d shut off her fear reflex, and was just allowing her body to progress with the birth naturally.

“There was no screaming.

“Despite the fact that she was exhausted, it was as if something primal had taken over and was delivering our babies for us.

“And I’ll never, until the day I die, forget the look on Josie’s face after Margot was born.

“It was like she was on a beach somewhere, with the biggest smile I’d ever seen in the world.”

She adds: “Any pregnancy involving twins is higher risk than with one baby.

“And with added complications comes added stress. That’s not good for mum or the babies.

“We are also conditioned to believe that labour is going to be hell. ‘The worst pain you have ever imagined, times ten.’

“Because of this, mums-to-be have a huge amount of fear about giving birth. So when we feel that first twinge of labour, our body tenses and our muscles tighten.

“Imagine the bottom of your uterus as a clench fist - it’s gonna hurt to get a baby through that!

“Hypnobirth teaches you skills so that instead your muscles relax, soften, open and babies are born easily and euphorically.

“And it’s not just about the days leading up to giving birth, it’s about your entire pregnancy and beyond.

“Giving birth to twins means you might have a lot more scans that normal. And while those scans can offer reassurance, they can also be stressful as you ride on a rollercoaster of emotions.

“The last thing you want is for twin babies to be swimming in their mother’s adrenaline.

“And hypnobirthing techniques can help mum to stay calm and collected throughout the process.

“It’s about making people feel safe and with the fundamental belief that birth is normal and our bodies work.”