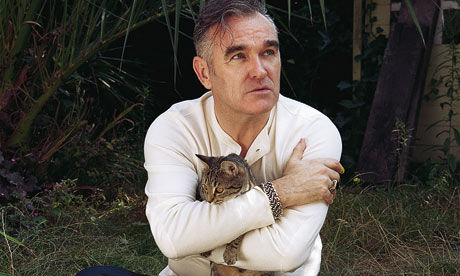 'A welcome catering challenge' ... Festival bans meat for a day to bag Morrissey. Photograph: Jake Walters for the Guardian

A Belgian music festival will go vegetarian for 24 hours to appease headliner Morrissey. Lokerse Feesten has banned meat from its food stalls on 4 August to celebrate the arrival of Manchester's most famous animal-rights activist.

Festival organisers had long "dreamed" of booking Morrissey, they said. "Many months we worked on it, for weeks we waited for an answer, many nights were spent sleepless." At last, the former Smiths singer agreed, but with one stipulation: on the day he performs, the festival will be meat-free. Bosses called it "a welcome catering challenge".

The result is an imposed "healthy break" at the festival, with organisers planning "an array of vegetarian dishes". Gone are the horse-meat sausages and, er, snails. Instead, we assume, festivalgoers will enjoy hummus, roast peppers and tofu burgers. Food stalls outside Feesten grounds, organisers warn, "are not affected by [the meat-free edict] and will offer their usual products".

A vegetarian since he was 11-years-old, Morrissey has been a staunched advocate of meat-free eating and animal rights. He has boycotted Canada due to the country's annual seal hunt and walked off stage at Coachella festival in 2009, complaining about the aroma of barbecued meat. "I can smell burning flesh," he told the crowd, "and I hope to God it's human."