A placebo is som

ething that has an effect for no known reason and therefore the effect is attributed to a belief rather than any intervention.  For a more detailed explanation and explosion of the placebo effect click here.

Placebos have been around for a long time and the namw comes from the stem word to 'placate' meaning to soothe or please.

In the USA placebo operations were carried on on patients with Osteoarthriis of the knee.  The result showed that there was no difference even after 12 months between the improvement of  the genuine op and the placebo op wheras the control group who did not have any kind of operation did not improve and deteriorated post the experiment.  The placebo op was a nick in the knee and conversation in the theatre that would be similar to a normal operation. See report here

The colour of the tablet is carefully considered by pharmaceutical companies.  Research has shown that the correctly chosen colour can enhance the effectiveness of the medication.

As more and more evidence comes in to show that our thoughts have a profound effect on our bodies.  So then you would think that we should all be able to think ourselves healthy  ... but it's not that simple.  The subjects of the placebo effect are not thinking themselves well, they are believing themselves well and that's hard to manufacture.  We rarely have any control over it.  It's just one of those thoughts that we don't even know we are thinking.

In this country it is considered bad form for the NHS to make use of placebo but that doesn't stop the placebo working the other way.  How easy is it to form a belief when you have the word of a professional i.e. "You have arthritis and will need a replacement knee wthin 5 years", "You have congenital heart problems in your family we will have to keep a regular check on your heart function".  Two potential negative placebos are instantly in place in those examples. We shouldn't just blame the doctors though, you know yourself that we all have a little hypnochondria in us and to some extent when we read/hear about symptoms can recognise them in ourselves.

It is and has been said by some very prominent people that anything you can image you can have and unfortunately that works for the negative things too.

Do you know what you are thinking?

Well considering we have an estimated average of 15,000 thoughts per day - that's 10 per minute, every minute of the day and night, it's probably fair to say that for most of the time you do not know what you are thinking.

Many thoughts are going to be reinforcing your beliefs so for the knee patients from the experiment they would be regularly telling themselves that the operation had improved their knee and it was cleaned out and getting better.  They would feel the emotional relief  of the promise of less from the pain.  A belief that they weren't really aware of but just accept.

Out of those 15,000 thoughts at least 1/2 are said to be negative.  That's an awful lot of negativity that you are absorbing without even knowing it for most of the time.  So it's not unreasonable to think that if your positive beliefs can make you better then your negative ones can make you ill.

Research into quatum physics is now beginning to show that our thoughts have influences and effects that we never even dreamed of not only on ourselves but also on the biosphere around us.  Therefore our thoughts can effect others and the world we live in.  But the first stop for our thoughts is our body.

So does positive thinking work? 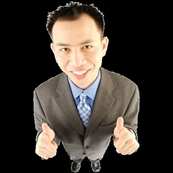 ny books around on the power of positive thinking and plenty of best sellers on the subject to and while a positive is better than a negative one, it would be impossible to use positive affirmations to replace all those negative thoughts that are working away in the background of your mind.

Some of the negative thoughts are worries and those are more noticable so that you can start to change things by being vigilant and learning to rationalise your thought processes in order to eventually worry less.  It's a lot easier to just carry on worrying though.

Spiritual beliefs are much deeper than positive thoughts.  Even unrealistic or unreasonable beliefs.  Ingrained beliefs from the past that are not really relevant or sensible are also difficult to overcome unless you stop and rethink them each time they pop up i.e. it is wasteful to not empty your plate.- but worse - you will never get anywhere with your attitude etc. etc.

Creating the positive belief in the face of all the implanted negatives is serious business.

Being more consicous of the words you are using for both internal and external communication can be a useful start towards beginning to chance the way you think.  See here for free offer

If you saw a hyperdermic needle and someone told you they were going to inject you with a miracle cure for tiredness or depression or the common cold and you saw them preparing the injection, then you were asked to look away and you felt a pin prick or a hair on your arm being pulled then you would probably believe you had the injection.  What'smore you would probably notice that you were less tired or more cheerful or brushed off your colds more easily.  Just because you had reasonable evidence to support the fact that you had the injection.

Hypnotherapy is able to get beyond your doubt and  create a new thought, which if congruent with your desires will begin to act like a belief at least temporarily.  So for instance you would not need to go to the trouble of arranging a hyperdermic needle for hypnotic suggestion to give you the belief that you were feeling more energetic, more cheerful or less susceptible to colds.

This is good but the trouble is that often the underlying belief doesn't want to go away.  It's being occupying your mind for a while and doesn't want to give up, so it can be a long process to persuade and encourage your negative thoughts to let go.

For a million corrupt and faulty reasons negative thoughts, beliefs and influences will not give up.  Many people are aware of them but just don't know what to do about them.  People are left feeling less than they could be, unfulfilled and if not miserable at least tense and mildly suffering.  Some people who are basically positive tend to put a brave face on it and try to ignore this, others find ways to divert their attention from it often never being able to relax and always having to be busy doing something. You can see how all this effort creates an emotional conflict and over a period of time that internal unrest and underlying negativity is going to show up in physical symptoms.

Resolving these deep routed negative beliefs is a skilled job and rarely one that can be done without professional help.  Hypnoanalysis can set you free from this negative entrapment.

We are not yet developed enough to use the great potential of our mind to fully treat our health but I believe we are at the dawning of a new era where we will start to take more responsiblity for our health care and expect a naturally healthy life.

However, working on yourself and using several methods to create a more positve mind set is always helpful until that time comes.

Here are a few suggestions from the thousands of ideas out there:

Please feel free to add your own comments and suggestions below.

Did you know that placebos can also have a negative effect resulting in the recipient experiencig negative symptoms - know as a nocebo.