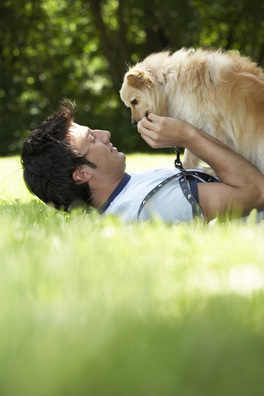 People itching for a solution to seasonal allergies could get help from self-hypnosis, a team of Swiss researchers suggests. The study finds that simply focusing one's thoughts on allergen-free environments can reduce symptoms of hay fever by one-third.

Although the arrival of spring brings better weather, it also triggers the release of plant pollens that cause allergies. Hay fever affects about 10-15% of adults in industrialized nations. To treat this, people turn to medications such as antihistamines, decongestants and sometimes steroids. But these can cause side-effects such as drowsiness, a dry mouth and raised blood pressure.

Allergy sufferers have sought alternatives approaches, including psychotherapy-related methods, to ease their itchy eyes and runny noses. Wolf Langewitz of the University Hospital Basel, Switzerland, and his colleagues sought to find out how well self-hypnosis works.

“We felt that the results were encouraging enough to tell people to try it, because this intervention is free of side-effects.” - Wolf Langewitz
University Hospital Basel, Switzerland

About 40 patients stuck with the regime for roughly two years, and were tested for their biological response to allergens: they were exposed to pollen and their congestion was assessed using a device that measures airflow through nasal passages.

The participants were tested twice: once in the absence of self-hypnosis, and once after practising this form of therapy. Their symptoms, as measured by the congestion test and from simply asking the patients how they felt, dropped by a third thanks to hypnosis.

Langewitz admits that the findings are preliminary and a bigger study is needed. But, he says, "we felt that the results were encouraging enough to tell people to try it, because this intervention is free of side-effects". Sheerin adds that the treatment may have other benefits: "Some people can't afford the medicine."
Abstract from original Article - Self-hypnosis squelches allergies, by Roxanne Khamsi, NATURE MAGAZINE